HOW TO MAKE A GREAT SHORT FILM 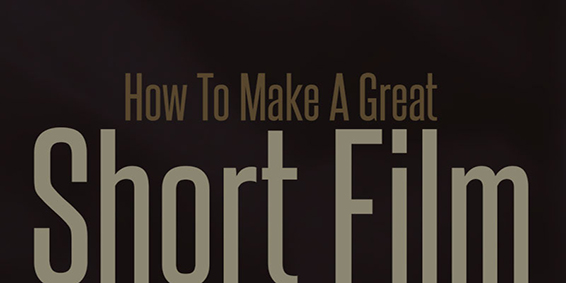 Most often in life you have to think Short and Small before you think Long and Big. Some people will tell you, “Don’t waste your time with shorts, go direct that feature script you've been slaving away at for x number of years. Shorts don’t make money. They make a little noise at a festival - if you’re lucky - and that’s it.” And you know what, there’s a lot of truth in that. Certainly ties in with my experience.

Any short film you make should teach you plenty about filmmaking. Every short film I’ve ever made was not only a steep learning curve in filmmaking, it was a learning curve in dealing with a team of people under highly pressured circumstances. It meant getting the best out of them even when you were exhausted and they were being clumsy. It meant solving problems and discovering real camaraderie, the kind of camaraderie that is impossible to find in an office, of a kind that comes closest to being in the army.

Indeed it is a battle. You need a plan and you need passion and grit to follow through if you'e to plant that flag and say, 'I did it.' It may be all you end up with is ten minutes on video, a film that only a few hundred people get to see and share with you, but it’s a battle worth fighting for if you are passionate about storytelling.

Although I still believe my next short film just might open a door that leads to a more substantial payoff, either in TV or film, than a bunch of Likes, I carry on making short films because I love to have a project on the go, and I love the rush of directing and producing.

Making a short film is a truly personal statement. You make a film for a car company or an ad agency, you’ve got all manner of people crawling all over it and pulling it into (and, often, out of) shape, and that’s just the way it is. But with a short film, you really have the chance to make the project YOURS, notwithstanding the mantra that any film is a collaborative undertaking.

Unless you are publicly funded, your short film will be your vision – or should be. Your baby. Which fact could of course lead to all manner of self-indulgent nonense before the end credits roll. But with your second or third film, if you’ve been paying attention, there’s every chance you’ve got those early self-indulgent desires out of your system and managed to develop a more mature approach. And with that, you start to identify what you’re about as a filmmaker. You start to see signs of a style coming through, a ‘voice’ maybe. For what it’s worth, it's my contention that you need both in order to become a great director of longer projects.

How To Write A Great Short Film

During the winter of 2015-2016 I extended my Kindle How To Write A Great Short Film to become How To Make A Great Short Film. I never set out to write an academic text, or to cover off every aspect of the subject – it was always going to be a little raw, my own personal take on the job of making a short film, from initial concept to finished product., but I wanted to get it out there because it was the kind of guide I wish I'd had on starting out.

I started writing the new eBook visualising a less experienced filmmaker sitting in the same room as me asking me for tips. Later, I sent it out to friends for comments, tweaked and published in February on amazon. Gratifyingly even experienced pros have left warm reviews.

Make a short to help others, too

In 2018 I produced two more short films: one with my writer/director/editor daughter, Shiona, called Look Inside, the other for my actor son, Jay, called The Business Proposition.  Look Inside is still in post, so we await the public's response in 2019. Off the back of The Business Proposition, Jay and the other young actor in the film, Dami Adeyeye, picked up management in LA. That for me was a result.

If you can’t get that feature off the ground just yet, give yourself the satisfaction of producing a great short film. It'll be food for the soul, even if it doesn’t pay the proverbial rent. And of course a great short can also be a useful calling card for your crew and cast, too, people who share your passion.

So if you want to make it a really good one, something you're proud of, check out HOW TO MAKE A GREAT SHORT FILM on amazon.co.uk and amazon.com.